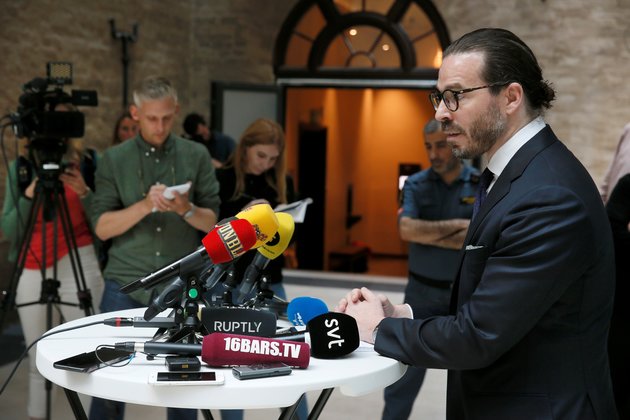 The president also tells reporters that many members of the African American community have asked him to intervene.

The platinum-selling, Grammy-nominated artist has been behind bars in Sweden while police investigate a fight he was involved in in Stockholm earlier this month.

Kim Kardashian West, Diddy, Justin Bieber, Shawn Mendes and Nicki Minaj are some of the celebrities who have shown public support for the Grammy-nominated Rocky.

She says their "commitment to justice reform is so appreciated."

WASHINGTON, DC - U.S. President Donald Trump claimed Sunday that his lawyers "absolutely shredded" Democrats' case that he should be ...

WASHINGTON, DC - A blueprint the White House is rolling out to resolve the decades-long conflict between the Israelis and ...

DELHI, India - Five people have been killed in a building collapse in the Indian capital of Delhi. Another 3 ...

WASHINGTON, DC - Thirty-four U.S. service members have been diagnosed with concussion and traumatic brain injuries as a result of ...

BEIJING, China - The death toll and infected rate from the Wuhan coronavirus in China has increased dramatically, while the ...

Etihad takes delivery of 38th Dreamliner, with a new twist

CHARLOTTE, North Carolina - General Motors is to open a new technical center focused on performance and racing in the ...

DENVER, Colorado - The U.S. Federal Aviation Administration (FAA) has issued a Finding of No Significant Impact/Record of Decision for ...

DUBLIN, Ireland - The importance of the tourism industry to Ireland has been highlighted in a report which has examined ...

SYDNEY, Australia - Shares in China dropped sharply on Friday as two populous cities in the country went into lockdown ...

The Hunt for Red October