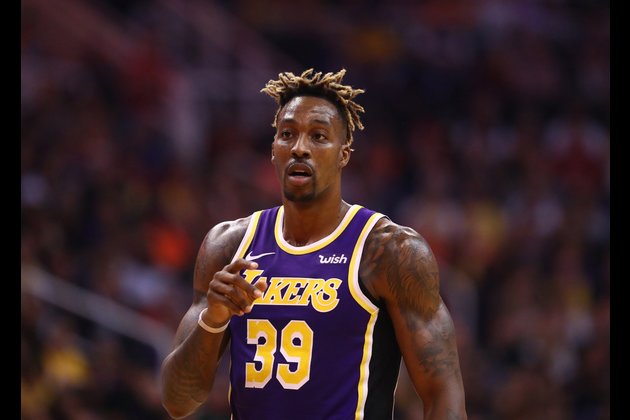 Dwight Howard's status for the resumption of the NBA season remains uncertain, but the Los Angeles Lakers don't plan to replace him on the roster.

"We don't have any intention of replacing Dwight's roster spot when we believe he'll hopefully be able to join us."

The Lakers and 21 other NBA teams will head to the ESPN Wide World of Sports Complex near Orlando next week ahead of the restart of play July 30.

According to ESPN, Howard is currently home in Georgia, adhering to the NBA's isolation and testing regulations. Other members of the Lakers are gathering in Los Angeles this week ahead of their relocation to central Florida next week.

Howard reportedly is dealing with several circumstances while weighing his options.

ESPN reported that Howard currently has custody of his 6-year-old son, David, after David's mother died of an epileptic seizure in March.

"He has an extenuating circumstance that he's working with the league on in terms of what that is ultimately going to look like," Vogel said.

In addition, Howard has been outspoken, along with Lakers teammate Avery Bradley and Brooklyn Nets guard Kyrie Irving, about NBA players' social responsibilities in the aftermath of George Floyd's death.

Howard issued a statement to CNN last month that read, "Basketball, or entertainment period, isn't needed at this moment, and will only be a distraction. Sure, it might not distract us the players, but we have resources at hand a majority of our community don't have. And the smallest distraction for them can start a trickle-down effect that may never stop.

"Especially with the way the climate is now. I would love nothing more than to win my very first NBA Championship. But the unity of My People would be an even bigger Championship, that's just too beautiful to pass up. What better time than now for us to be focusing on our families?"

The Lakers did make a roster move Wednesday, deactivating Bradley and signing free agent JR Smith. Bradley stated that he won't play the rest of the season in order to remain with his family.

Howard, 34, is averaging 7.5 points and 7.4 rebounds in 19.2 minutes per game for the Lakers this season. He had made two starts in 62 appearances.

The eight-time All-Star is on his fifth NBA team in the past five seasons.

MILWAUKEE, Wisconsin: A Wisconsin pharmacist is to be jailed for three years for destroying hundreds of doses of Moderna's COVID-19 ...

Daughter of Peru's former president losing by 0.4% in election

LIMA, Peru: Peruvian socialist and school teacher Pedro Castillo was holding on to a slim lead over candidate Keiko Fujimori ...

Speeding, alcohol called cause of upswing in Iowa road deaths

DES MOINES, Iowa: In a bid to reduce the state's increasing number of traffic fatalities, Iowa officials said this week ...

QUITO, Ecuador: Ecuador has obtained $550 million in financing to begin its campaign to administer Covid vaccinations to its population, ...

CAPE CANAVERAL, Florida: For the first time in 20 years, a NASA spacecraft has traveled close enough to one of ...

Google to lay internet cable from USA to Argentina

MOUNTAIN VIEW, California: Google is building a subsea cable that will run from the east coast of the United States ...

Positive day on Wall Street for stocks and U.S. dollar

NEW YORK, New York - Stocks in the United States and Europe rose across the board on Friday, in a ...

PARIS, France: Renault, the car manufacturer based in France, announced on June 8 that French prosecutors had leveled charges of ...

Ireland to allow some workers to return to offices in August

DUBLIN, Ireland: Taoiseach Micheal Martin has said some Irish workers might return to working in their offices by the end ...

War for the Planet of the Apes