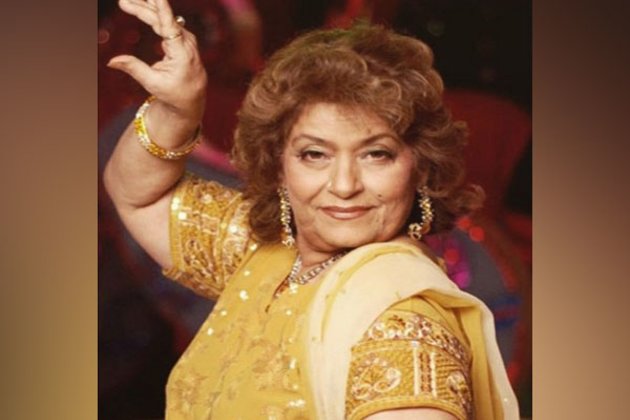 New Delhi [India], July 3 (ANI): The news of ace choreographer Saroj Khan's demise on Friday has left the Bollywood in a state of sorrow.

Many B-town celebrities took to their social media handles to pay tribute to the dance maestro.

Actors including Akshay Kumar, Anupam Kher, Bhumi Pednekar, Jacqueline Fernandez, Ritiesh Deshmukh, Farah Khan and others expressed their grief on Twitter as well as on Instagram and remembered Khan for her impeccable journey in the industry.

"Woke up to the sad news that legendary choreographer Saroj Khan Ji is no more. She made dance look easy almost like anybody can dance, a huge loss for the industry. May her soul rest in peace," Akshay Kumar tweeted.

Veteran actor Anupam Kher bid an emotional farewell to the dance master and penned a note in Hindi remembering her for her kindness.

He explained how beautifully Khan had taught the world that a person "dances not with the body, but with the heart and soul".

Pednekar shared a photo of Khan on Instagram and extended condolences to the family.

"R.I.P Saroj Khan MaamYour legacy lives on [?] Condolences to the family," she wrote.

Fernandez shared a picture of the choreographer on the photo-sharing platform and wrote, "Rest In Peace Saroj mam.."Riteish Deshmukh recalled working with Khan for 'Aladin.'"Rest in Peace Saroj Khan ji. This loss is immeasurable for industry and film lovers. Having choreographed more than 2000 songs she single-handedly changed the landscape of how songs were shot. I had the pleasure of being choreographed by her in Aladin. One tick off my bucketlist," he tweeted.

Director Farah Khan described the late dance maestro as her "inspiration" while paying tribute to her on Twitter.

"Rest in peace Sarojji.. u were an inspiration to many, myself included. Thank you for the songs," the director said.

Director Madhur Bhandarkar to actors, including Taapsee Pannu, Genelia Deshmukh, Neil Nitin Mukesh and many others have paid tribute to the iconic choreographer.

Her list of credits include iconic numbers such as 'Dhak Dhak Karne Laga' from Beta (1992), 'Ek Do Teen' from Tezaab (1988), 'Hawa Hawai' from Mr India (1987) and many more. (ANI)Khan, who was earlier admitted to a hospital in Mumbai last month for breathing issues, passed away on Friday. She was 71.

She died due to a cardiac arrest in the ICU of Guru Nanak Hospital, where she was admitted on June 20.

The last rites of Saroj Khan will be performed at Malvani in Malad, Mumbai today. (ANI)