Late for Work 9/18: Pundits Near Unanimous in Ravens vs. Texans Picks 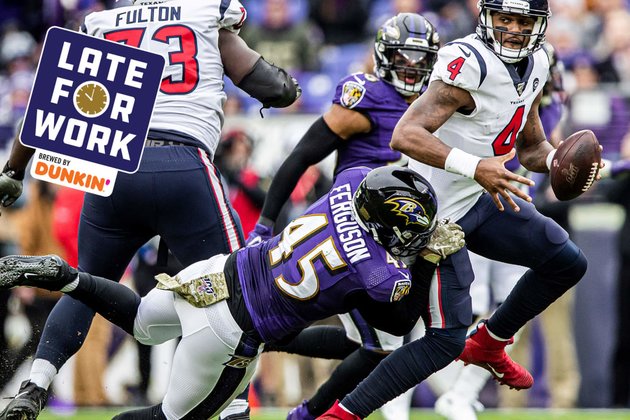 Pundits Near Unanimous in Ravens vs. Texans Picks

What was expected to be a shootout between the Ravens and Texans last season ended up being a rout, as Baltimore thumped the visiting Texans, 41-7.

The prognosticators are nearly unanimous in their belief that the Ravens (1-0) will win again when they visit Houston (0-1) Sunday. In looking at predictions for the game, 44 of 46 pundits picked Baltimore.

While none of the 24 pundits who predicted the score have the Ravens winning by as wide a margin as they did last year, 15 have Baltimore prevailing by double digits.

That probably says more about how dominant the Ravens have been than it does about the defending AFC South champion Texans, a talented team led by dynamic quarterback Deshaun Watson. Baltimore has won 13 consecutive regular-season games, and the majority weren't close.

Here's a sample of what pundits are saying about the game:

The Texans are always a dangerous opponent because of Watson, but the Ravens are the better team.

The Baltimore Sun's Childs Walker: "The Texans can't be taken lightly as long as they have Watson creating something from nothing at the most important position on the field. But the Houston defense could not stop the Ravens last season and could not stop the Chiefs in Week 1. The Ravens need to improve their run blocking to operate at peak efficiency, but they simply have more ways to win on both sides of the ball."

The Texans will not be able to slow the Ravens offense.

NFL.com's Gregg Rosenthal: "Their expensive inside linebackers (Zach Cunningham and Benardrick McKinney) won't be able to cover Baltimore's backs and tight ends, and it's hard to imagine Houston's pass rush getting to Lamar Jackson, who's fresh off perhaps the best throwing day of his career. Yes, he's getting better."

Sporting News' Vinnie Iyer: "Houston may try to take away the deep ball like it did against [Patrick] Mahomes and Kansas City, but it would be asking to be pounded and worn down by ball control with rookie J.K. Dobbins and Mark Ingram supplementing Jackson on the ground."

Pro Football Talk's Mike Florio: "No answer for Lamar Jackson. Lamar Jackson spreading the ball around to guys like Miles Boykin, Hollywood Brown and Mark Andrews. The running game with J.K. Dobbins and Mark Ingram. I just think it's more than what the Texans can handle. It's just going to be one of those gradual smotherings."

Brown vs. Texans CB Bradley Roby is a key matchup.

Baltimore Beatdown's Vasilis Lericos: "Roby is the Texans' top cover man. He did an admirable job shadowing Tyreek Hill for most of the Week 1 contest. But Hill, a player with a similar skill set as 'Hollywood', eventually scored a fourth quarter touchdown against Roby's coverage. New Texans Defensive Coordinator Anthony Weaver, a former Ravens defensive lineman, kept his safeties deep last week in an effort to prevent big plays against the Chiefs, which allowed [tight end] Travis Kelce to dominate. However, against a less fearsome stable of wideouts, Weaver may deploy a game plan designed to limit the Ravens' own elite tight end Mark Andrews, which would in turn enable Marquise to continue his ascendant season."

How many times the Ravens sack Watson could be critical to determining the outcome of the game.

Penn Live's Aaron Kasinitz: "Since 2017, the Texans are 11-1 when Watson starts and opponents sack him two or fewer times. In games when Watson's gone down more than twice, Houston has a record of 13-14. ... In its 41-7 drubbing of Houston in November, Baltimore sacked Watson six teams and added a seventh sack on backup A.J. McCarron in garbage time. Five different Ravens dropped a quarterback at least once."

Ravens Wire's Neil Dutton: "The Texans offensive line will need to be at their best against the Ravens pass rush, and that is what they were not against the Chiefs. Watson was pressured on 37.5% of his dropbacks in Week 1 and absorbed three hits and four sacks. The Texans allowed a sack rate of 11.1%, which was the third-highest in the NFL in Week 1."

The Texans will look to attack the Ravens defense with their running game.

Sports Illustrated's Todd Karpovich: "The Browns did have some success against the Ravens with their outside runs. The Texans will follow that blueprint behind David Johnson, who ran for 77 yards with a touchdown against the Chiefs."

Snead, who scored a touchdown against the Browns and had four receptions for 61 yards (the most yards he's had in a game since Week 16 of the 2016 season when he was with the New Orleans Saints), paid tribute to a close friend and former college teammate.

Emblazoned on Snead's right cleat was an image of Eric Patterson, who was shot and killed by an intruder last year during a home invasion. He was 26.

Patterson, a cornerback who played in three NFL games in 2015 (two with the Indianapolis Colts and one with the St. Louis Rams), and Snead were teammates at Ball State.

"The design is a tribute to the role Patterson played in Snead's transformation from an undrafted rookie out of a mid-major college program into one of the NFL's toughest, most dependable slot receivers," Penn Live's Kasinitz wrote. "It's a nod to record-breaking careers at Ball State, shouting matches on the practice field and fits of laughter across campus."

"That's the mentality I've held onto since Ball State, attacking the DBs, trying to make them the best players they can be. If I'm doing that, they're going to give me exactly the same thing back."

Jackson Is No. 1 in NFL.com's QB Rankings

Coming off another spectacular performance that saw him win AFC Player of the Week honors for the fifth time in his past nine starts, Jackson took over the No. 1 spot in NFL.com's QB Index.

"Every time a disappointing playoff exit casts aspersions on his passing ability, Jackson opens the next season with a jaw-dropping aerial display," NFL.com's Chris Wesseling wrote. "Jackson played faster than ever in the opener, as if the battles in the trenches were operating in slow motion. It's a tremendous advantage for a quarterback who is seeing the field well, knows where he wants to go with the ball and always seems to have a receiver all alone and unaccounted for by a bedeviled defense struggling to compensate for the Ravens' numbers advantage."

Jackson opened the season at No. 2 in the rankings, behind Mahomes.

WASHINGTON, DC - With just a few days until voters cast the last ballots in the U.S. presidential election, the ...