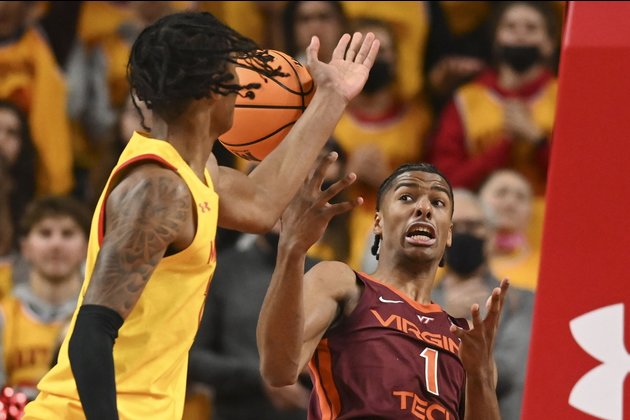 Down in the second half, Virginia Tech turned to Keve Aluma, who delivered 17 points and 12 rebounds as the Hokies rallied at Maryland for a 62-58 victory in the Big Ten/ACC Challenge Wednesday night in College Park.

Justyn Mutts added 16 points, scoring a fortuitous bucket with 21 seconds left when he drove the baseline, lost the ball on the way up and saw it deflected into the hoop by Maryland defender Fatts Russell.

Hunter Cattoor added 12 points as Tech (6-2) overcame an unsightly stretch of the second half when it watched a four-point lead turn into a seven-point deficit.

Maryland (5-3) was led by Qudus Wahab, who scored 18 points and grabbed seven rebounds. Donta Scott contributed 11 points and seven boards for the Terps. Hakim Hart scored eight of his 10 points in the second half for Maryland, but missed a 3-point attempt with 15 seconds left that would have tied it.

Down 43-36 midway through the second half, the Hokies rallied as Aluma scored six of his points in the final eight minutes. Tech took the lead for good when Nahiem Alleyne and Cattoor made back-to-back 3-pointers with less than six minutes left.

Cattoor drilled another 3-pointer with 2:55 to go that gave Tech a 59-52 advantage. Maryland whittled the deficit to a point before Mutts made the game's key basket.

In a tight first half, neither team led by more than five points. Wahab grinded inside for a pair of 3-point plays, while Aluma and Mutts answered for Tech, combining for 19 points, including a trio of 3-pointers.

Mutts gave Tech its biggest lead, 33-29, with a layup to start the second half. But Maryland answered with a 14-3 run.