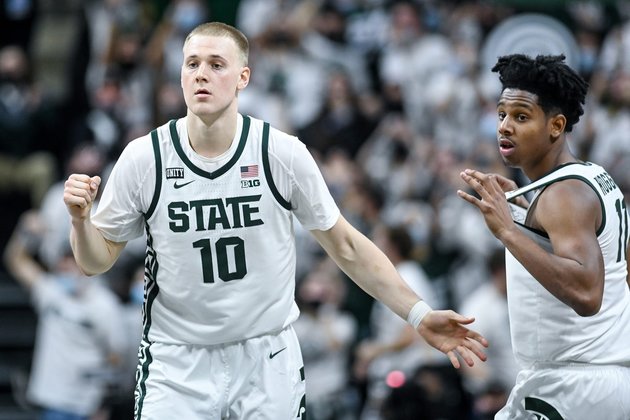 Michigan State keeps playing with fire, but so far the No. 10 Spartans haven't gotten singed.

They will carry a nine-game winning streak into Saturday's Big Ten home game against Northwestern in East Lansing, Mich.

"We're 14-2, and there's been better teams than us that have lost to worse teams than Minnesota if you're going around the country right now. And it doesn't make me feel better," coach Tom Izzo said. "It just makes me put things in perspective. I have to do a better job in some areas."

A.J. Hoggard drove into the lane and set up Hauser for the winning bucket.

"It was his first game-winner in college, everyone always wants to hit a game-winner, especially at a level like this, and especially us being targeted right now, being top 10," Hoggard said. "It was big for us, and kept the winning streak going. I was happy for him, I was excited and glad I got to be a part of it being the assist man on the job, so it was a good moment for me, too."

The Spartans held a slim lead most of the way but the Golden Gophers had a late 5-0 spurt to tie the game prior to Hauser's basket.

An ongoing issue for Michigan State (14-2, 5-0 Big Ten) has been turnovers. It has averaged 14.4 per game and committed 13 more on Wednesday.

"The turnover thing is driving me crazy. I have done one hell of a job of keeping my composure on turnovers," Izzo said. "Just try to do a better job because that was not good enough to win. We won't win Saturday if we do that."

When they didn't give the ball away, the Spartans were efficient offensively. They shot 51.9 percent from the field, the fifth time this season they have shot at least 50 percent.

"The name of the game was find a way to win and move on," Izzo said. "So we did, hopefully we can move on and learn from it."

This will be the second time the Spartans have faced Northwestern this month. Michigan State rallied from a 13-point deficit on Northwestern's home court to pull out a 73-67 win on Jan. 2. Gabe Brown led the way with 20 points.

That began the Wildcats' current four-game losing streak. Northwestern (8-6, 1-4) has dropped each of those games by single-digit margins, including a 94-87, double-overtime loss to Maryland on Wednesday. The Wildcats also lost by four points at home to Penn State and eight points at Ohio State.

"Really heartbroken for our guys. ... Loved the fight and heart in our guys, finding a way to get it to overtime," coach Chris Collins said. "We got the lead in overtime and we just couldn't get stops."

"In order to win, we can't have a minus-20 free throw disparity in these games," Collins said. "But we're going to keep fighting. We're very disappointed where we stand through five (Big Ten) games. These three home games, we had a great chance to win and didn't get 'em."

BANGKOK, Thailand: In a landmark move, Thailand, on January 25, emerged as the first Asian nation to decriminalize the use ...

TAIPEI, Taiwan: In its largest sortie in 2022, China sent 39 warplanes towards Taiwan on January 24, amidst tensions over ...

PARIS, France: Under the latest COVID-19 rules adopted by the French government, leading tennis player Novak Djokovic could be allowed ...

WASHINGTON D.C.: The percentage of students graduating from U.S. high schools in 2021 plummeted in twenty states due to Covid ...

GAINESVILLE, Florida: Shark attacks soared worldwide in 2021.Research conducted by the Florida Museum of Natural History and the American Elasmobranch ...

AMSTERDAM, Netherlands: Dutch military police have confirmed that a stowaway, a 22-year-old Kenyan man, was found alive in an aircraft's ...

MENLO PARK, California: Facebook's parent company, Meta, has announced the creation of what it believes is among the fastest artificial ...

Casino plans to build in UAE in Gulf region

RAS AL-KHAIMAH, UAE: Ras al-Khaimah, one of the UAE's seven emirates, has announced the signing of a multibillion-dollar agreement with ...

SYDNEY, NSW, Australia - It was a bloody day on Asian markets on Thursday following gyrations on U.S. markets overnight.A ...

Ireland has 17th highest fuel prices in world, up one-third since 2021

DUBLIN, Ireland: Ireland has among the highest prices for petrol and diesel in the world.In the past year, fuel prices ...

MIAMI, Florida: A cruise ship with hundreds of passengers and crew onboard has been diverted to the Bahamas from its ...

The Story of Temple Drake