Clemson warms up for Florida trip with rout of Loyola Maryland 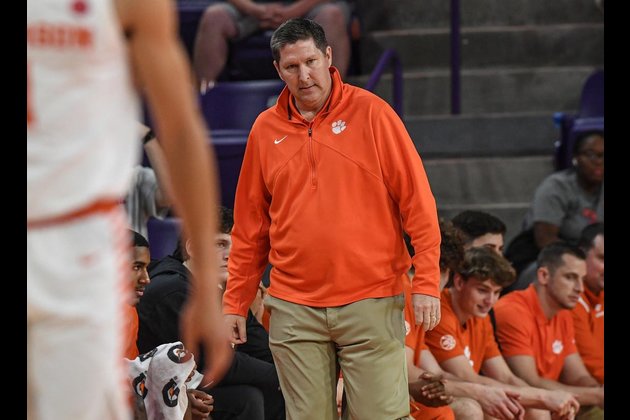 Clemson picked up its third consecutive win on Tuesday night, cruising by visiting Loyola Maryland 72-41 in a campus game of the Emerald Coast Classic.

Both teams will now head to Niceville, Fla., for the remainder of the tournament.

Hunter Tyson paced Clemson (4-1) with 14 points and nine rebounds. Alex Hemenway added 13 points, hitting on all three of his attempts from beyond the 3-point arc, and Chase Hunter had 10 points.

After scoring four points and pulling down two rebounds, Greyhounds leading rebounder Golden Dike was ejected nine minutes into the game after a technical foul. His absence helped allow the Tigers to dominate the glass, as Clemson won the battle on the boards 41-27.

The Tigers wasted no time asserting their dominance, starting the game on an 11-6 run and never looking back. An 18-0 run over the final 6 1/2 minutes of the first half saw Clemson break it wide open, as coach Brad Brownell's team took a commanding 43-14 lead into the break.

It was a stifling defensive effort, as Clemson held the Greyhounds to 6 of 24 (25 percent) on 3-point attempts and just 28.8 percent shooting from the field.

With the Tigers extending their lead to 34 in the second half, Brownell was able to get some of his more inexperienced players some valuable minutes. Freshmen Josh Beadle, RJ Godfrey, Dillon Hunter and Chauncey Wiggins all saw extended time, with each logging more than 10 minutes. Wiggins and Godfrey finished with seven points each.

Clemson returns to action against Iowa on Friday night after Loyola Maryland squares off with Southern University on Friday morning.

BUENOS AIRES, Argentina: A massive wave struck the Viking Polaris cruise ship this week as it was sailing toward the ...

After years of upheaval, US judge throws out Huawei fraud indictments

NEW YORK City, New York: Last week, a U.S. judge has dismissed an indictment against the chief financial officer of ...

PALMDALE, California: Northrop Grumman has unveiled its new B-21 "Raider" jet, the first in a new fleet of long-range stealth ...

NEW YORK, New York - Stocks in the U.S. and around the world fell on Wednesday although losses were mostly ...

Hearing aids now sold without prescriptions in US

WASHINGTON D.C.: Hearing aids can now be sold without prescriptions from a doctor in the U.S., making it easier and ...

Musk confirms that apple to resume advertising on Twitter

SEATTLE, Washington: Amazon.com is planning to resume advertising on Twitter, pending some security tweaks to the company's ads platform, purchasing ...

Mexico, US plan joint strategy to lure businesses back to N. America