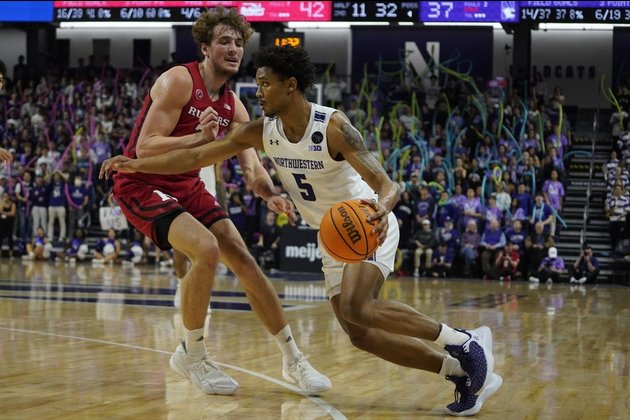 The Wisconsin-Northwestern men's basketball game that was postponed from Saturday due to a COVID-19 outbreak in the Wildcats' program will be made up on Monday afternoon in Evanston, Ill., the Milwaukee Journal Sentinel and the Wisconsin State Journal reported Friday.

The fast turnaround was necessitated because of a lack of other options in the teams' schedules.

The makeup game on Monday would create a quick turnaround for Northwestern, which is scheduled to play at Nebraska on Tuesday.

Wisconsin is scheduled to play at Maryland on Wednesday.

Northwestern postponed two games this week. The Wildcats' contest at Iowa, originally scheduled for Wednesday, was rescheduled for Jan. 31 in Iowa City.

The Badgers (12-5, 4-3) were ranked as high as No. 14 in the country before losing three in a row earlier this month. They beat visiting Penn State 63-60 on Tuesday in their most recent game.

MOSCOW, Russia: Russian state-run TASS news agency has reported that a US woman was detained and fined by a Russian ...

ISLAMABAD, Pakistan - Former President General (retd) Pervez Musharraf died in a Dubai hospital on Sunday at the age of ...

Up to 2,000 Israelis to be housed in new town on Gaza border

JERUSALEM - Israel on Sunday announced plans to build a new town on the Gaza border .The town, temporarily named ...

US cancels over 1,800 flights due to ice storm

CHICAGO, Illinois: After an ice storm ravaged states from Texas to West Virginia, this week, airlines canceled over 1,800 flights ...

PRAGUE, Czech Republic: Ahead of her visit to Taipei, Marketa Pekarova Adamova, Speaker of the Czech Lower House, reiterated to ...

PARIS, France: Following an 18 month controversy that exposed the workings of the global jet market, Airbus and Qatar Airways ...

At US urging, Japan to stop exporting chip technology to China

TOKYO, Japan: Japan is preparing to revise legislation to allow it to restrict the export of advanced semiconductor manufacturing equipment ...

TOKYO, Japan: Honda has announced that it will manufacture a new hydrogen fuel cell system, which was jointly developed with ...

As prices of EVs fall, manufacturer Rivian to reduce workforce by 6%

IRVINE, California: In an effort to cut costs in preparation for an industry-wide price war, electric vehicle manufacturer Rivian Automotive, ...

SANTA CLARA, California: One week after Intel forecasted lower-than-expected sales caused by a loss of market share to rivals and ...