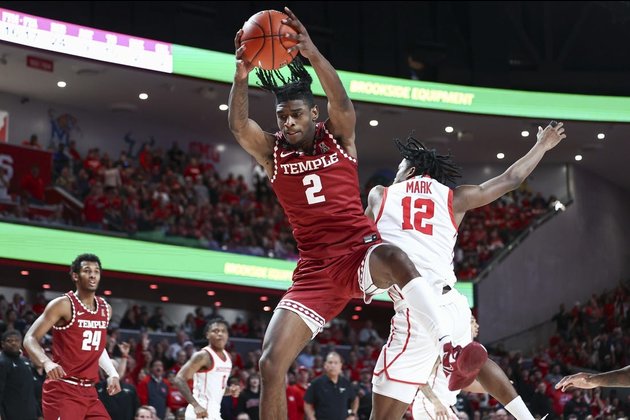 Damian Dunn scored 16 points and made the deciding free throw with 1:06 to play as visiting Temple took down No. 1 Houston 56-55 on Sunday in an American Athletic Conference slugfest.

Temple (12-9, 6-2) led by seven points after a pair of free throws by Nick Jourdain with 6:37 to play. The Cougars tied the game on a steal and 3-point play by J'Wan Roberts with 1:30 remaining, and Dunn followed by making 1 of 2 shots from the foul line to grant Temple a one-point advantage.

Houston's Jamal Shead (13 points) had a 3-pointer go in and out with 37 seconds to play, and the Cougars did not foul, opting to play defense. That seemed to work when Dunn missed a contested layup with 8.3 seconds remaining.

Shead then drove to the basket but had his layup blocked out of bounds by Kur Jongkuch with 1.3 seconds left, giving Houston (18-2, 6-1) a final chance to win. Tramon Mark's layup bounced off the rim and out to allow Temple to beat a team ranked No. 1 in the nation for the first time since Feb. 20, 2000.

Zach Edey posted 24 points and 16 rebounds as the Boilermakers slipped past the Terrapins in Big Ten action in West Lafayette, Ind.

Braden Smith made two free throws with 3.9 seconds left, and Jahmir Young's desperation 30-footer at the buzzer was off the mark. The Boilermakers (19-1, 8-1) notched their sixth straight win and are off to their best start through 20 games in program history.

Purdue never trailed but had to hold off the Terrapins, as Edey was the only Boilermaker to score from the floor in the final 15 minutes.

Julian Reese led Maryland (12-7, 3-5) with 19 points on 8-of-11 shooting from the field on Sunday. Jahmir Young, Maryland's top scorer, was scoreless for the first 25 minutes. He finished with 10 points, seven rebounds and seven assists.

Jordan Hawkins tallied 20 points to lead four scorers in double figures as the Huskies routed the Bulldogs in Hartford, Conn., to snap a three-game losing streak.

Hawkins made 7 of 14 shots from the floor and added six rebounds to pace UConn (16-5, 5-5 Big East), which was coming off losses to Seton Hall, St. John's and Marquette.

Chuck Harris scored 16 points for Butler (11-10, 3-7), which has dropped four of its past five. Simas Lukosius supplied 12 points and six rebounds.

EAST PALESTINE, Ohio: After a freight train carrying hazardous chemicals derailed in Ohio near the Pennsylvania state line on February ...

Rescue teams in Turkey and Syria continue the search for survivors of the catastrophic earthquake that hit the region on ...

US weighs ending protection of bears at Yellowstone, Glacier Park

WASHINGTON D.C.: The Biden administration has indicated that it could end federal protection for grizzly bears in the northern Rocky ...

Philippines hands over four more military bases to US

While friends and foes rush to Syria's aid, U.S. refuses to help

WASHINGTON, DC - The global community has extended aid to Turkey and Syria following the devastating earthquakes that hit the ...

WASHINGTON D.C.: US lawmakers have called on the Department of Energy to release documents detailing attempts by Russian hackers to ...

Honda sends out 'Do Not Drive' warning for 8,200 US vehicles

TORRANCE, California: Due to un-repaired Takata air bag inflators that can explode and unleash potentially deadly metal shrapnel inside vehicles, ...

CAPE CANAVERAL, Florida: In a tweet this weekend, Elon Musk said that SpaceX may attempt a Starship rocket system launch ...

LONDON, England: The Society of Motor Manufacturers and Traders has reported that new car registrations in the UK rose for ...

TAIPEI, Taiwan: After the end of COVID-19 disruptions in China, Taiwan's Foxconn, the world's largest contract electronics maker and major ...